I would like to show you an idea about the functionality of the webpage, and later as a phone app, to teach a language the way children learn to speak, for example, Indonesian.

How Children Learn to Speak:

I would love to hear your opinion about it. What I found out is, that I have some text in Google Docs:

Google Docs has a function in the tools menu: "Translate document". And if you select in the menu "Tools" and "Translate document", it creates a new one, with the same formatting. So you have the entire text formatted in the same way, so nice! Then you can read it and know what it is all about.

Some features need to be added:

Further, I am thinking about a phone app, which is also available for computers, and on a webpage as well.

Now comes a trick to demonstrate the intended behavior in Google Docs:

One voice shall read each word in the language you want to learn on the left stereo channel into your left ear. Which engages the emotional part of your brain.

Alternating, a different voice, reads the individually translated word in your mother tongue language on the right stereo channel. Which engages the logical part of your brain. If you are a left-handed person, you should switch earbuds.

The app repeats the words, and it reduces the volume of the translations, depending on your response speed. And finally, it leaves the translations away. So that you only concentrate on pronunciation and speed.

In this example, the 3 dots here, cause Google Translate's text-to-speech engine to slow down the speed, and provide a break. So you have time to repeat the word.

So, it does not read the entire sentence, but word by word:

You have time to speak it out loud. The app should have a microphone open and qualify what you say, and how you pronounced it.

Yeah, and if you pronounce it well, it increases the speed. And if you pronounce it not well, it reduces the speed to give you more time to practice. And it repeats the word up to 3 or 5 times, or until you can speak it with good pronunciation at a reasonable speed. And then continues to the next one. The app shall store your level of confidence individually for each practiced word. So that it can restart on your level when the word comes up in later practices. That helps to learn vocabulary and to improve pronunciation. And it adapts the speed of training to your learning speed and pronunciation abilities.

Open on Google Drive a Google Docs text document. For any text you paste in here, you just can use the menu to select "Tools", then "Translate document", and choose the "Language". You end up with an almost perfect translation.

Let's give you an example with a challenge: You are a student who wants to learn Indonesian?

Sure, that's not proper grammar, but it is Indonesian grammar. As soon you get used to how Indonesian speakers express themselves. Now, you have an easy time adapting the way how children learn speaking! No baby ever had the idea of going to the library and getting a grammar book to learn to speak its mother tongue language. They just embody it by listening to it and modeling what they hear. I think that's the most natural way to learn to speak a language.

I think this should be either a computer app or on a web page and with voice recognition. And if the voice recognition recognizes the word which you repeated, then the was pronounced well. Using the computer voice to read this, you even could put it in different accents. So, if somebody wants to go to India, there is no point in learning Oxford English. As you know, the Indians will laugh about the overexposed and stiff-sounding British pronunciation. And because they pronounce words very differently, you will have a hard time understanding them. But in the app, you could put its voice for the language training to Indian English. Then, you start listening, adapting, and understanding the funny-sounding Indian English. And you will start speaking a little bit with their accent.

I have a hard time falling asleep at night at the moment. Because I'm so excited about this idea. It's just great for utilizing it in your conversation skill practice.

Another thing on how children learn speaking

For this kind of speech training, you do not even need to look at the screen. So you can use it while driving, doing sports, or walking. But the app, of cause, could additionally show the words, the written word on the screen:

while speaking it. But, it would be even better, to show instead

that reminds you of the meaning of the word.

A word is a very complex construct! You need to read the letters, you need to know how they sound. And they sound different in each language. Plus languages use different character sets, like in

Wow, what a mess the written languages are! To process a written word, the brain needs to put the sounds of the characters together to build a word. But finally, the brain creates a picture of it, which it can handle easily. I worry that by now, it is already too tired to memorize the connection between the sound and the picture. But if the app shows the picture, all of the complexity of this process gets removed! And your entire brainpower can be focused on linking the picture to the sound of the word. Just like children learn to speak: Seeing a puppy, hearing someone calling it a puppy, and memorizing the sound of a puppy to the picture they see.

Imagine a computer, that does a world weather simulation, which occupies 99.999% of its calculation capacity. And when you move the mouse or type a letter on the keyboard, it takes several seconds, until the mouse cursor moves, or the letter appears on the screen. This is what happens when we learn to speak a language by reading, writing, and grammar rules.

Our brains always build pictures of all of the information we receive. How about just showing a picture? For example, the word "banana": Yeah, just a banana picture, or a monkey who's eating a banana, and the monkey sticks the banana in its butt. A good idea, you monkey! You'll never forget that because it is funny! The funnier, or emotionally engaging, the better. Because emotions are the carrier to memorize information. Without emotional engagement equals no memory.

Learning to speak by reading, writing,
and grammar rules lead to boredom.

It shall solve problems, from which you do not even know that they exist.

It is the second worst state you can be in to learn.
The worst one is post-mortem!

In the beginning, we just want to get for easy conversation. That gives quick success experiences and keeps you motivated to continue learning. And reading comes later, much later. And soon, writing won't be necessary anymore. Because voice recognition of the computers is getting so good. As soon as you can reasonably pronounce it, you do not need to write anymore. That's just the skill to learn and master.

You can utilize that also here with Google Docs in the class. See it's it just took two or three minutes to prepare this example. And you end up with two documents that completely correspond to each other. You have all the vocabulary already here.

And the words are in the same sequence in your mother tongue language, representing the grammar of the language you are learning. That develops your feeling for the grammar. You learn it intuitively, instead of rule-based, which is another highly complex concept, like putting characters together.

So, you have only the translation of the full text instead, people always have a hard time finding out, which word in one language corresponds to which one in the other one. So let's have a look at the Indonesian version: If I don't know 3 words I do not know in one sentence, which 3 ones do they relate to in English? Because the different grammar sorts them in a different sequence. So I should show that on a split screen at the same time.

And then, one word in Bahasa Indonesia and the corresponding word in English paper at the same position.

All the technology is there, and it is time to make the best use of it and overcome old-school learning methods. 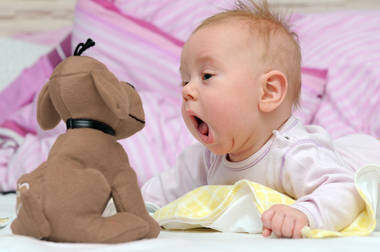