Speech Synthesis
Question: How will the stock market develop in the next 3 months to 3 years?

It is the year 2241.
The internet is gone, and an interbrain connection replaced it.
The consciousness of mankind has risen, so that humanity became a global brain, actually even more, rather a cosmic mind.
This awareness makes all information available to anyone.
People, and even animals, can live their purpose, which they chose by themself.
The understanding of I am everything, I am nothing, I am pure consciousness, I am energy, I am love, I am god, became the accepted truth.
This created a world in balance and harmony, swinging the pendulum for healthy and never-ending growth.
My wealth is beyond 2.5 billion euros. And this is by far more, than I ever imagined, even if I already donated more than half of my assets, which ended the hunger in the world.
I am full of vital energy and enjoy perfect health. I can heal myself and others, just by thought alone. But it is hardly necessary anymore because the majority of people mastered that skill.

I am meeting Jamie, and he asks me:

"How should I invest my money now?
How will the stock market development in the next 3 months to 3 years?" 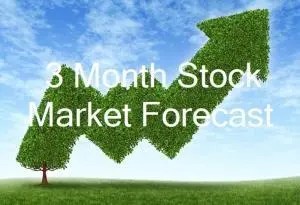 So, I respond: "Let's analyze the current situation, the global economic cycle. Further, let's try to understand where we are currently, and compare it with similar situations in the past. The economy always went through ups and downs, called boom times and crashes, growth, and recession, accompanied by inflation and deflation. Currently, we are going through a deflation, so let's have a look at this first.

Such a phase usually lasts 1 to 3 years.
Prices drop quickly while the value of cash increases.
Credits become more expensive interest rates decrease. Currently, interest rates are even negative in Europe.
The trust in cash increases, because the prices of products and services fall, due to lower demand, fewer customers, and higher competition.
The economy slows down dramatically. The fear increases, that the crisis will last long and the outcome is uncertain.
This fear causes further collapsing stock markets and increased volatility. Those are always pleasant times for the Volatility4Happiness game, selling the earnings of the stock that have peaks and reinvest in the dropped ones.

Volatility4Happiness Game: How to Play on Volatile Stock Markets?

Those Zombie-businesses, which only stayed alive due to subventions, go bankrupt. Even if the governments, keep increasing the subventions for them. This only delays the process of market self-regulation. This is a problem with the low consciousness of the majority of the governments. They try to treat the symptom with the same method, which caused the problem. And that delays the time until the turnaround point is reached. This madness leads to even more fears, nervousness, and unhealthy market conditions. Until it finally creates an even deeper recession.

All of those businesses, who did not understand how to take advantage of the downward trend, keep saving costs, stop investing and release employees. Prices of energy and commodities drop. Increasing unemployment leads to the start of many new businesses. Because many people do not see another chance to make a living, apart from becoming an entrepreneur themselves. With the courage to go for this last choice, they need to succeed, and that creates a firework of creativity. This initiates the single most positive thing of a crisis:

The rise of consciousness to the next level!

Newly founded businesses, the restructuring of the old businesses that survived the crisis, and the elevated consciousness of the new entrepreneurs, lead to a new economic boom. High market volatility indicates, that a turnaround is near. Because some good news leads to unrealistic expectations of the economic recovery. Bad news will follow by the realization, that the expectations exceed the actual recovery speed. Because the speed of recovery is usually slower than the downward movement during the recession.

The value of gold, energy, and commodities increase
due to the increasing demand.

Instead of gold, I prefer to invest in gold mines. Their profitability is highly dependent on the gold price, so if gold rises 10%, the gold mines rise between 20 and 30%. So it has higher volatility, but a similar price history as gold. This behaves almost like leveraged gold. But you do not have to pay interest for the borrowed money for the leverage! And often it follows with a little delay, which allows seeing its development ahead by analyzing the gold price movement. But this is only good for short-term speculations.

Economy booms into a bubble, until it overheats and crashes. An exponential end spurt of stock prices will indicate that the turnaround is coming soon. This is usually accompanied by a sequence of all-time highs of the global stock indices.
A correction of the market follows through a slump, which leads to the next recession."

The pain and challenges during the crisis will create growth of awareness, consciousness, and mental development to the next level. It will enable me to foresee the development better, it enables me to initiate the necessary steps, taking action, and create the desired outcome I want. It is not only me but the entire population, which got hit by the current situation. And that will stimulate and increase consciousness globally within the next 3 to 5 years.

E.g. in the midwest of the US, where the majority of the population is still on the red meme, Spiral Dynamics level 3. This is represented by a lawless cowboy mentality, Trump supporters, ruthless layers, sheeters, who are still running around with their guns as their dick extenders like in the wild west movies. Other examples are China and Russia. They will slowly convert to the blue meme, Spiral Dynamics level 4, and understand the benefits of a regulated society by laws, regulations, and rules, to make living together safe and organized, so that violence will decrease. But it will lead to decreased economical growth, especially compared to those countries that are already solid orange, level 5.

Countries, that are on the blue meme, Sprial Dunamics level 4, will grow into the 5th level, the orange meme. Examples are Germany, Singapore, Australia, and Japan. They will overcome the overregulation of civil servants, and grow into entrepreneurial thinking. This more business-friendly environment will lead to healthy economic growth.

Regions on the orange meme, level 5, which are already positive economically minded, with a strong influence of the local entrepreneurs, like the industrial arias like California's silicon valley, China's Shenzhen region, will convert to the green meme, level 6. This will lead to taking responsibility for the planet, environmental protection, increased welfare to decrease poverty. But it will decrease their growth rate, so they will fall back behind their growth rates during their orange times.

And finally, those rare regions, which are already on the green meme, level 6 will convert to yellow, level 7. And this is where the fun begins. Candidates are from Scandinavian countries, maybe New Zealand, or Canada, but I don't consider any of them as solid green yet. So, this might rather take another 10 years, and it might require another crisis to move them up there.

That's the outcome of my growth, I am getting out of this crisis. And I am enjoying this challenge to the fullest. I learned so much about myself, the psychology of others, societies, and the differences between the western and eastern cultures, which I am deeply grateful for.

Life Target 3: Absolute financial freedom and contributing with it to ending the hunger in the world

Creating wealth is getting easier and easier, which allows contributing more and more. Even if money doesn't directly help directly to end the hunger in the world, e.g. by buying them food. Because first the awareness and consciousness of the poor need to be elevated. But money can help to do so! I am grateful for understanding this. And that I can start to initiate this growth just by the power of my mind.

I am asking Warren Buffet:

"How can I take advantage of the current situation on the stock market?
And how do you expect, that it will develop?"

He smiles, takes a deep breath, and responds:
"Where are we in the economic cycle? Currently, it is a great time to start investing. Credit is cheap, and a lot of markets are still undervalued. The high value of currencies, represents the trust people have in money, even in new crypto currencies. But the big ones are currently tremendously over evaluated. There is time to wait for the next correction, which I expect within 3 to 6 months.

The Philippines had the worst market performance in Asia since the start of the crisis. So there is a big chance for the next 3 years.

The reported numbers of deaths in India, will make investors careful and lead to an undervaluation of the Indian market indices. Even if the news is pure bullshit! 200.000 people is a lot, but India has about 4.5 times more people than the US. And if you calculate an average lifespan of an Indian person, 50,000,000 Indian people are dying every year! So, the little bugger is only considered responsible for 0.4%. And who believes in those numbers, if the news is lacking the information to put the numbers into a relationship with. At least I have a hard time trusting them. But my gut feeling tells me reliably, that something is missing.

Individual stocks that are currently undervalued are:

Both are entrepreneurs somewhere between the yellow or turquoise meme, Spiral dynamics levels 7 and 8. And so, I expect them to create any outcome they want. Completely independent of what blue level 4 politicians try or decide. Those entrepreneurs are making their way, and from their elevated and holistic level, they will take even better care for society, the planet, and the universe than simple-minded politicians can think of.

What's going to happen within the next 3 months?

Since the majority of people, who are willing to get vaccinated, will receive their immunity shots, the fear will decrease, and the markets will represent that by reduced volatility. Then, a wave of news about the termination of the lockdowns will stimulate market phantasies and we will see a spike in the stock markets. That's what we currently see on the tech indices for example the NASDAQ, which exceeded already the hights from February 2020 by 30%.

People will start travelling, visiting restaurants, go partying. They will work less from home and commute to work again, meeting colleagues and friends, and consuming more. Needless to say, that this will create a bigger demand for energy, resources, commodities. So, all of those will raise their prices. It just depends on your taste, in which you want to invest.

Laying on my death bed, just one quote came into my mind:

“I would do it all over again as I did.
With one exception:
I would look for better advisors sooner"

And then I thought:

"And I would have learned to listen to and trust my inner voice sooner!
Because it is my best advisor."

Gratefully for this insight, I closed my eyes and calmly slept away.

previousSafety Third
nextFear – How to Overcome Anxiety And Fears During The Crisis?

Understand the messages of your body. And, how to act on them to extend your lifespan.