I participated in the morning meditation and the yoga class. This day I did not do any other sports. After breakfast, I went to the history-house with the intention of writing. But the US election, kept me busy, by checking the latest results. But there was no movement in the results all day. Apart from the noise from Trump, fighting his downward battle. The way he behaves is a shame for a democratic country. Even the Africans are laughing about him, saying: "He creates circumstances, in a first-world country, that we had in our third-world countries a long time ago."

The volatility in the market still was high, but Asia stocks started rising. It seemed like Asia already celebrated to get rid of Trump. And as a result, of the end of the cold war with China, which he started. So, that the world can go back to do civilized business with each other again. The latest news was quite entertaining, but not of much value. I took a little lunch and spent the afternoon again at the history-house.

Enjoying my thinking time there, I made a proposal for some business ideas for Komang. How to get her own business up and running? I created a draft of a new landing page with the new ideas.

And I asked her to provide me with access to her webpage. A friend of hers created her homepage. But she did not have access to the login data herself. Further, I shared with her the mindmap we draw the day before, while she was telling me about the meeting with the manager at the yoga and surf hotel.

Lately, she bought a big junk of smoke sticks, which she wanted to sell. So she designed a wrapping for it. I had a look at it. Well, it did not impress me. 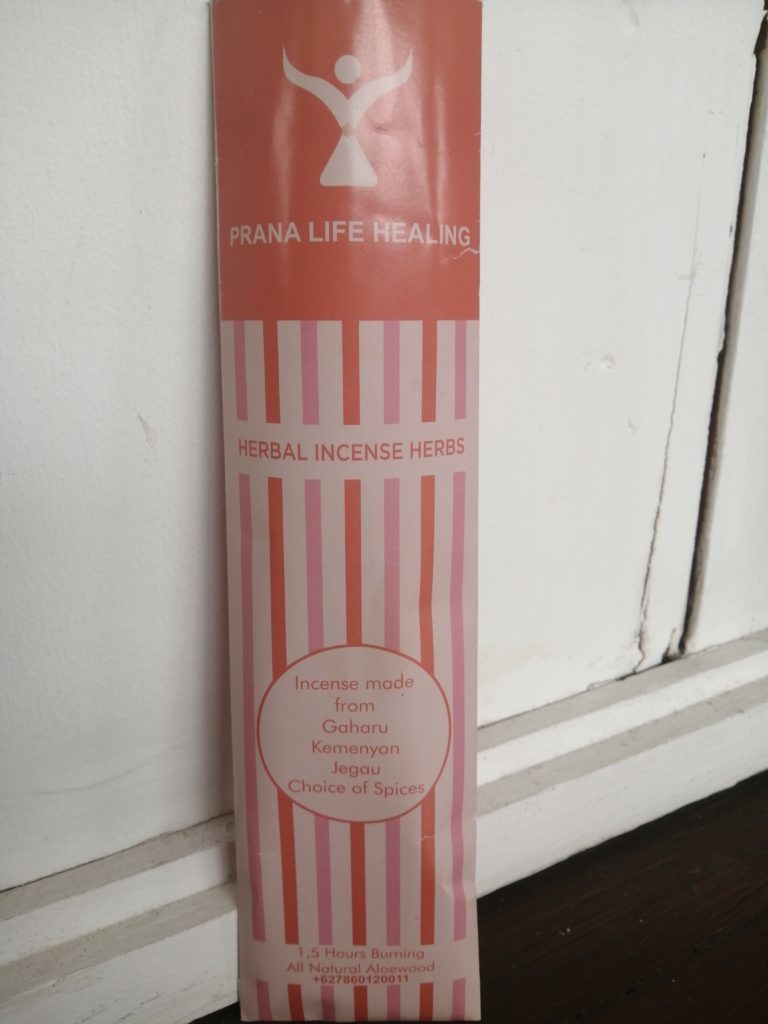 The day before, at the warung where we had breakfast, I saw a pretty incense package which inspired me. Now, I sent the picture to a designer on Fiverr. And ordered to do create something similar, branded for my girlfriend's business Prana Healing Bali.

I walked for dinner, and thereafter I returned to the History-House and kept watching the development of the stock market. I sold Enphase after 2 days with about 8% earnings and Silver with 3%. Because I expected, that commodities like silver and especially gold. Both commodities will drop after the election results are available. Particularly, if Trump would win, but this anyway was hardly likely anymore.

Shortly after I sold Enphase, it jumped up another 6%. Did I ever mention, that patience is not a strength of mine? Right away I thought about opening a short position for it because this stock is perfect for my volatility game. It stays in a constant bandwidth and has high volatility within it. But, my broker did not allow short positions at NYSE. And I did not want to go short in the Frankfurt stock exchange. Because the trading fees are too high there.

The two trades did cost together 60€ at the Frankfurt stock exchange. The fees for the round trip at XETRA are about 10€, but one cannot trade Enphase there. And at NYSE two trades of that value cost only 6US$. But trading in US$ adds an additional fee for the forex currency exchange. And the earnings in the US are getting taxed twice. First, you pay 26.4% tax on your earnings in the US, and the remaining earnings will be taxed in Germany with 25%!

After dinner, I kept on reading Deepak Chopra's book quantum healing, about the quantum mechanics of the human body. It got quite clear to me, how blind our education still is about it. All though, the theory of quantum mechanics is already known for almost 100 years. And during the time I went to school and studied, it did not even get mentioned, at least I can not remember it. I think I shall ask my son if he already got taught something about it in school.

To Do:
1. I will ask Louis what he learned so far about Quantum Mechanics.
2. Share the videos from Leo Guera bout it with him.

So, I still got raised and educated in Newton's world of science. A result only can be caused by an event that causes a causal reaction, which can be described by linear physical equations. Even though all of the big inventors like Einstein, Plank, ..., became mystics. At least as soon as they realized, that there are phenomena, that cannot be described by their equations. Science still ignores that and considers it as esoteric nonsense. This is as stupid as saying: "Only my god is the real one!"

Some obvious examples for the existence of reactions, that cannot be described like that, are

So, it is not the pollen, which creates an allergic reaction, but only the mind.

Healing with the power of your mind

In his book, Deepak Chopra mentions this example:

A woman came for surgery to remove gall stones. But what they found was a spread cancer. The diagnosis was noperable. And her life expectancy was only a few weeks or months, until cancer will be spread thoughout the entire body.

After the surgery, Deepak told her: "All went well, we removed the gallstones". Deepak still expected her to to the graveyard soon. But, she recovered quickly and left the hospital. About one year later, she came again to see Deepak. She expressed her gratitude. "I worried so much that it was cancer. But I am glad, that your surgery healed me."

They did some health checks. And in fact, all the cancer cells were gone. But in fact, it was her new mindset, what healed her!

After it got too dark to read, I went to the firehouse, watching the flames, until the fire went almost off, and it was time to sleep.