It was a beautiful sunrise this morning, and I joined the morning meditation. But instead of Jasmine's yoga class, I chose a bike ride. Along the way, I listened to Kurt Tepperwein's audiobook: "The force of the creative imagination".

Learn in this video, how to enable english subtitles. 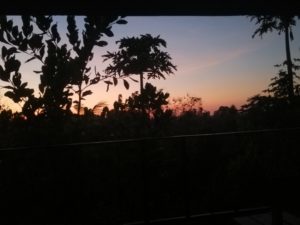 Suddenly, a pedal broke and fell off. And I thought: "This bloody bicycle requires more maintenance than my scooter."

Anyway, I made it back in time for breakfast. But before that, I enjoyed a water blessing. And once again I imagined, that the cool water flows like the cosmic energy through my crown chakra into my body, healing and rejuvenating every cell.

Injuries on the right side of the body

While I let healing happen, I thought, that most of my injuries appeared on the right-hand side of my body:

The right side of the body stands for the outer world. But it did not make sense to me ... yet. What it wanted to tell me? I had no idea.

I took a shower, had a ginger-coffee, and began learning Bahasa Indonesia. But while I was listening to the lesson "kekuatan mental munggu 7", I fell asleep.

When I was scanning the last pages, Komang arrived to pick me up for our trip to Lovina. I welcomed her with a hug and some kisses. But it felt distanced. She was carrying a strange kind of energy inside, which I did not understand. I offered her to join me for lunch before we are heading off. What she rejected because she did not feel hungry.
So, I went alone to my room, packing my stuff, taking a little snack from the buffet. Then we started the scooter ride towards Bali's northern coast.

The ride on her Yamaha Nmax scooter to Lovina was pleasant. She hugged me a lot from behind and kept saying "Sayang, I love you", again and again. And I kept responding: "Keep on loving me, Sayang!" But somehow, it felt like empty phrases, due to the strange energy she was carrying today. What was wrong? I couldn't comprehend it.

When we arrived at her house in Lovina, she realized that she hasn't brought the key. So, she called her sister, to ask her to bring her keys over, to get inside. Instead of waiting for her, we went to Lovina Beach and checked-in at Seabreeze Lovina Bungalow. I used the WiFi to have a look at my depot. Trading was as expected calm, but slightly rising after the result of the US election. I held only one short position, a China Top 50 ETF, which was ranging near an all-time high. I expected the current boost will be over soon because it is politically motivated. China investors celebrate already to get rid of Trump.

In the first trading hour, I bought more of the US energy ETF for 13.05 € per share. And it rose during the same day by 12% to 14.58 €. In total, my depot gained in total 106,000 € during this day. That made it the day with the highest earnings in one day of my entire life ... so far. Which made me curious, what was the reason for it. So I looked up the news, and I found: This is the day, the entire world was waiting for:

Announcement of a Vaccine

The news reported, that the Pfizer and BioNTech vaccine is 90% effective. So, the market turned positive right away. It became a great day, with huge earnings. But the best was still to come.

We went for a walk along the beach. And finally, we ended up at a restaurant at Lovinga Beach for dinner. To my big surprise, I saw two familiar faces: Ana and Scot, my former girlfriend and her son. They had dinner with Ana's new boyfriend, Johann from Switzerland. She introduces me to him, but he reacted quite distanced. I introduced Komang to them, but I saw, that she was not very relaxed with the situation.

We took a seat at the other end of the restaurant. And then she finally told me, why she was so strange today: "My menstruation is already 10 days overdue." I asked her: "Does it feel like being pregnant? You have been pregnant twice before. You know how it feels." She responded, that she isn't sure, but that their boobs are bigger than usual. This is like being pregnant, but that also happens before the menstruation starts. Further, she told me, that she is not ready for having another baby. "I need to take care of her two kids, which she already has. And I want to work. Due to that, I do not have time for another baby." I felt inside, and I was sure, that she is NOT pregnant. Even if we had a lot of unprotected sex during the last month. So, I promised her, that I will take care of her, in case she would have a child from me. So that she does not have to worry about it.

Then Ana turned up at our table for some small talk. She told me, that her son Scot got his foreskin cut last week. And she explained, how good it is for the hygiene of the penis. I just thought, how much religion influences our perception of facts. "Do you really think, that it is the intention of god to do so? That would mean, she made a mistake creating the most essential reproduction part of a man?" This thought seems to be religiously stupid, or simply nonsense. In some cultures, this is even done with women, by cutting out their clitoris. This is just bullshit, motivated by stupid traditions, considering sexual pleasure is something dirty, which needs to be prevented. And in the belief, by cutting off the most sensitive part of the sex organs, suppresses the desire for it. The results of it show clearly, that it does not work that way. Lust and the desire for sex are created in the mind. If treating the symptom, the mind will find another way to make it happen!

I had to go for a phimosis surgery myself when I was 3 or 4 years old. And due to that, I never experienced the sensation of the most sensitive part of my foreskin during sex. This part of the penis has the highest density of nerves. So I do not know, what I was missing out on. Anyway, Ana invited us to come to her place for coffee for the next day. But I told her, that we are busy. Because I had the feeling that Komang was not comfortable meeting her.

I kept checking the development of the stock market, and it was breathtaking. All of my assets were going up. My only worry was the Chinese Top 50 ETF, for I held a short position. Due to the fact, that I not only invested my money but additionally with 350,000 Euros. Which was a credit from my broker. So, the effect was leveraged. It was mind-blowing. I am so blessed!

After finishing dinner, we said goodbye to Ana, Scot, and Johann, and we made our way back to the sea breeze bungalow. Where we started a guided meditation, during which we felt asleep.