What is the meaning of the Law of Giving And Receiving 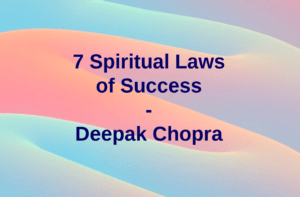 This audio is, to understand the concept of Giving And Receiving for Entrepreneurs better. So, listen to this passage from Deepak Chopra’s Book the 7 Spiritual Laws of Success.

To apply the Law of Giving as an Entrepreneur best possible, you need to

Think positive about earnings and the flow of money

In most cultures, there are many negative believes about money and business. People assume the news as a representative source of information. But they are not! In fact, the bad news is selling better. That’s why you get to acknowledge the cases of corruption, bad business habits, scandals in enterprises, how companies make their customers addicted, tens of times more often than about the good ones. Even if there are tens of times more good companies out there than bad ones! So, not even 1% of the businesses are responsible for all of the bad news!

There are plenty of movies, for example, Super Size. It reports, how sick one becomes from eating only at McDonald’s 3 times a day. But there are no movies about how much money Bill Gates did put in charity. Actually, he and many other extraordinarily successful entrepreneurs gave the majority of their assets to charity! Hardly anyone would watch the movies with positive examples. So reports about such positive examples are rare, very rare. To run your business successful you need to

Now it is time to have a look and do some research, which brain damage that kind of bad news already did to you. And wich beliefs it created. To do so, have a look at Self Limiting Beliefs – How to Overcome a Self-Limiting Belief.

Resources for Confeneurs about the Law of Giving and Receiving

Free downloads of the 7 Spiritual Laws of Success are available from:

1 thought on “Law of Giving For Confeneurs = Conscious Female Entrepreneurs”

Videos For Mindfulness, Personal Development, Enlightenment and Self-Actualization on

Scroll to Top
Open chat
1
Hello,
here is Klaus Forster from Vitality4Happiness.
- How can I support you?
- And what is your name, please?